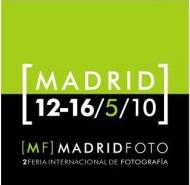 MADRIDFOTO 2010 is Spain's only international fair specialised in contemporary photography aimed at a new kind of private, corporate and institutional collector.

Scheduled for May 12th through 16th (both inclusive), the second edition of the fair is changing venues this year and moving to the Palacio de Deportes de la Comunidad de Madrid in the city centre of Madrid. MADRIDFOTO is designed to be an exciting experience and an enjoyable way of discovering new values in contemporary photography.

After the success of its opening event in 2009, registering in excess of 12,500 visitors, this year the fair has been extended an extra day to give professionals extra preview time. MADRIDFOTO 2010 is also increasing the number of exhibitors to 60 galleries, 7 publishers and 5 magazines, taking part at this second edition of a fair with a mandate to offer a unique vision differentiating it from other art fairs.

Over the last year MADRIDFOTO has been presented in various European capitals coinciding with other international fairs, as was the case of London during FRIEZE, Berlin during Art Forum, Paris during ParisPhoto and Miami during Art Basel Miami Beach, as well as an event at the Aperture Foundation in New York.

MADRIDFOTO 2010 has the full support of the Ministry of Culture of Spain, the government of the Region of Madrid and also of the City Council of Madrid, as well as collaborating companies interested in contemporary photography who have placed their trust in the success of the second edition of this fair. Besides the collectors programme, MADRIDFOTO 2010 has already ensured a commitment for acquisitions from institutions and enterprises in Madrid and is also preparing three awards for sustainability (Acciona-MADRIDFOTO award), architecture (Fundación Arquitectura y Sociedad) and young photographers (Comunidad de Madrid–MADRIDFOTO Award). It is also organising debates, encounters and other acts to get curators, programmers and museum directors more directly involved with the event.

The deadline for inscription for galleries, publishers and magazines wishing to exhibit at MADRIDFOTO 2010 has been extended to February 26th 2010. Application forms and rules for participation can be downloaded on www.madridfoto.es. The final list of exhibitors will be made by a selection committee, this year comprising Efrain Bernal (gallery director), Lorena Corral (independent curator), Nicholas Metivier (gallery director), Rosa Olivares (critic and editor of EXIT magazine) and Carlos Urroz (director of Urroz Proyectos, Ideas y Comunicación Cultural).

MADRIDFOTO is directed by Giulietta Speranza and organised by Art Fairs SL, a private initiative of a group of collectors and entrepreneurs, headed by Enrique de Polanco.